I can't resist a cute fairy design so I had to stitch up the Magic ornament from Charlotte's Web Needlework in the JCS 2010 Ornament issue. The suggested DMC colors came out a little lighter than the model photo in the magazine so I modified them for a little more contrast. For 963, 3716, 3731, and 3733, I substituted 3716,3733,3831, and 3731 respectively. I'm not a fan of metallic threads, but the silver wings and smyrna x-stitches on the dress called for it, so I suffered through it. And I just used some embellishments I had in my stash. 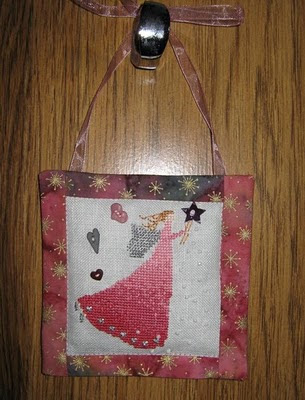 I've stayed away from knitting patterns that use double-pointed needles after my one attempt on a dishcloth some time ago. But it made me mad that so many people seemed to do it so routinely, so I decided to tackle it again. The incentive was this super-cute owl coffee sleeve pattern. This was a test run for practice. I had read on Ravelry that a lot of people thought it turned out too large, so I knit one fewer owl than the pattern called for. The yarn is just some left-over Red Heart that I had hanging around. After a few false attempts, I kind of got the hang of it and I'm pretty pleased with how it turned out. I added French knot eyes and duplicate stitch beaks. Now I can get some nicer yarn (maybe that Knit Picks Swish super-wash wool!) and make another. I finished it easily in one evening including all the frogging and re-starting. A nice quick gift. Here's a photo on a porcelain cup I bought as a gift that looks like the Starbucks take-out version. 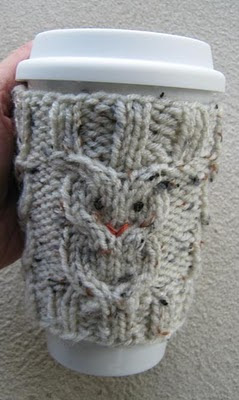 The final bit of sweetness for today are two thank you notes I received on Friday. These came from the daughters of a co-worker to whom I sent the Day of the Dead ornament I made this year. These drawings are just too adorable. I like the way Cecilia turned me into a 60's hippie! This was quite the unexpected treat! 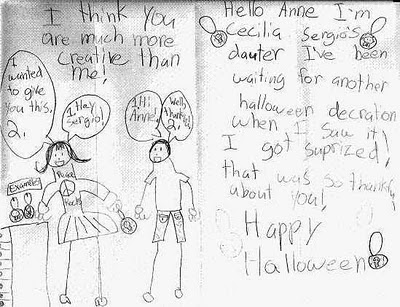 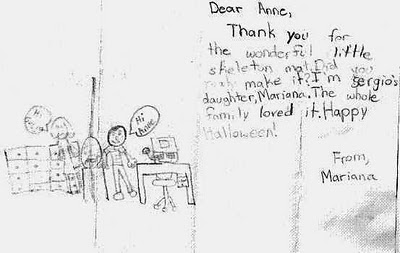 I believe I was the last subscriber to receive the JCS ornament issue. Finally I had to call them when it didn't show up and they re-sent it. That took an extra ten days. But I do like the issue and the Nov/Dec issue has already arrived too so I'm caught up.

I decided to stitch the Sam Sarah snowman 'Love' ornament first. So many pretty colors and such a fun design. I used all DMC so it looks a bit different from the magazine model. I didn't have those L-O-V-E buttons to attach to the gifts so I just used some little buttons from my stash instead. I like the way she used couching for the heart border. Very effective and original. The ribbon hanger is a deep purple. Not sure if the color is showing up well in the photos. I took one inside and one outside and, of course, I'm not really happy with either one. 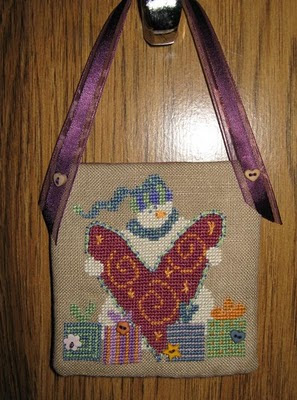 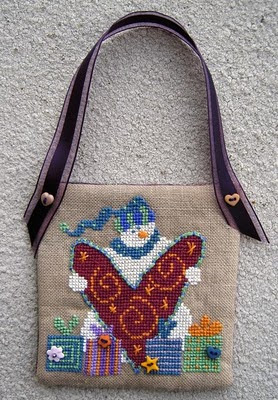 I have a friend who loves Little Lulu. You have to be of a certain age to remember the comic book character, but she was beloved by many little girls at one time. My friend believes she even looks like Lulu. She has long, dark, naturally curly hair that tends to hang in corkscrew curls, but I think that's really where the resemblance ends. For quite a while, I've wanted to stitch her something Lulu-related, but apparently that character has not been licensed by the x-stitch pros. So I bit the bullet and adapted a drawing myself. My method is just to trace the design onto tracing paper and then tape it to graph paper printed with the same number of squares per inch as my fabric. Instant chart! Here's the result with plenty of back-stitching to help get the shapes right. She's stitched on 25-ct Vikki linen. I used some DMC color variations for the dress so the color wouldn't be so 'flat'. And that ice cream cone is from the skein of pink Princess floss that I won a while back. I think I'll make it into a little bag of some kind with some cute backing fabric I found today. 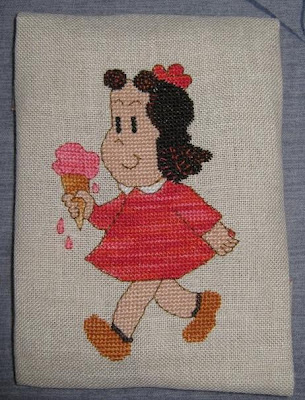 I received a lovely surprise gift from Kirsten. It's a luminary made out of card stock with a cross-stitch design. You just put a tea light (battery-powered for safety!) inside. This is so cool, but so difficult to photograph. This photo is showing the light from the lamp behind it. There is no light inside yet. Kirsten used an opalescent fabric so it's really sparkly. And it folds flat so it can be mailed like a greeting card. You can see better photos on Kirsten's blog, the 10-16 entry. 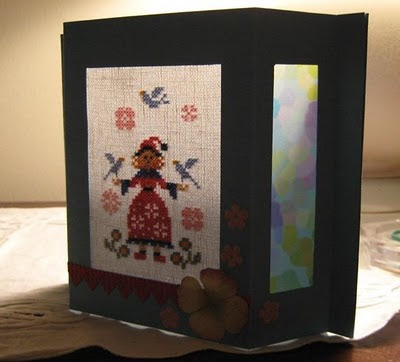 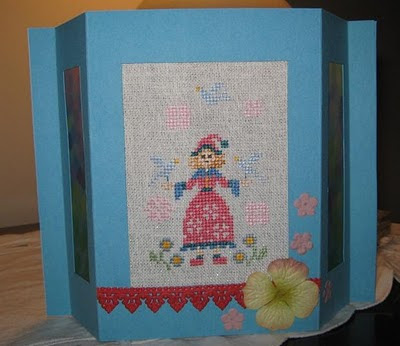 This must be the year of the penguin for me. My latest finish is the Workbasket "Mr Quaker Penguin" stitched on 28-count white Monaco over one. This will be a gift for a purple-lover (who may or may not be a penguin lover). I used Sassy's Strings hand-dyed floss in "Royalty", a rich color with lots of variation. This floss is a very reasonably priced alternative to some of the other hand-dyed threads on the market. But I just read that she is discontinuing this product. Apparently it just doesn't make economic sense for her to offer it. Sigh..... 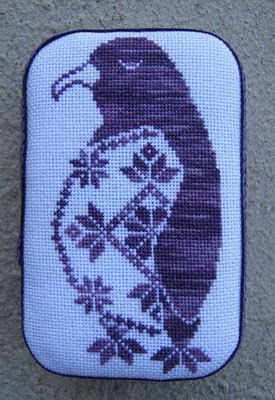 I added lots of purple trim to the Altoid tin both inside and out. 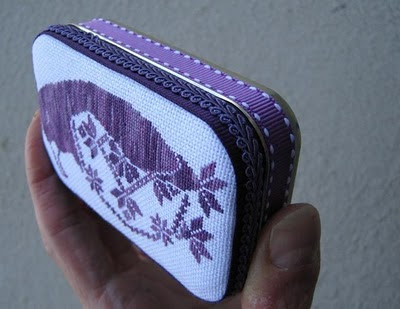 Plus I made another crocheted penguin motif in purple thread to live on the inside. 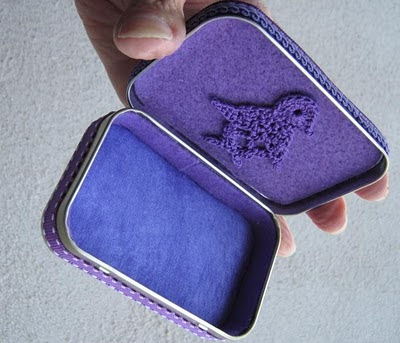 The project took a bit more time than I thought it would due to the arrival of my seasonal headaches. But doing just a little bit each day adds up to a finish before your know it!
Posted by Annie at 1:11 PM 33 comments: