Last year, I made my SIL a card with a woman dressed in Regency period, Jane Austen-style finery. I was trying to find something Downton Abbey-ish, and that was the best I could do.   Time marches on at Downton, and sooner or later they will be entering the Art Nouveau years, if they aren't there already.   I had seen these six Art Nouveau ladies by Lesley Teare some time ago, but I couldn't find a copy of the UK magazine in which they originally appeared.  On a whim, I checked Lesley's site and she had them for sale as PDF files.  I was delighted!  Perfect for this year's birthday card.

I hadn't done back-stitching like this for a while.  I was really out of the habit.  I used to love doing it, but now, not so much, even though I still like the look.  I saw that I had no 32 ct white linen in my stash when I was ready to start.  So on a whim, I bought some of the MCG linen at Joann's so I wouldn't have to wait for a mail order.  I had not heard very good things about it, but turns out that I kind of like it.  Some people have said the number of threads per inch differ between the horizontal and vertical, but if so, it didn't matter on something of this size.  I couldn't detect any difference at all.  The fabric feels kind of like Annabelle, a discontinued Zweigart fabric, that was actually cotton, but had the thick and thin threads of linen.  It was a bit cheaper than linen and I always liked that.   This MCG linen was really cheap, so I was very happy with it.

In person, the card looks really good.  The ribbon shows it off so well.  And it doesn't look blurred or wonky like the photos.  I'm rarely so pleased with any of my finishes. 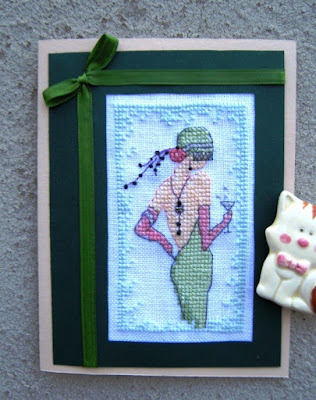 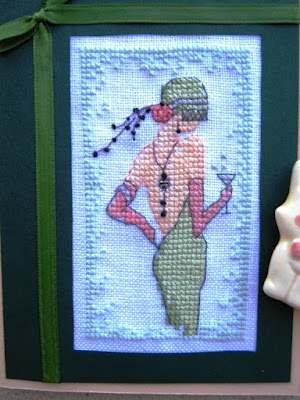 As a long time sewer and hoarder, I have some spools of thread that go back many years.  They say thread gets old and kind of dry rots, but I haven't found that to be true.  I use all the thread til I have an empty spool.  I recently finished all the thread on this real wooden spool.  I use it as a place to park a steel crochet hook.  It seemed like it could use a bit of ornamentation, so I completed "Sister Stitcher" by the Primitive Hare, a freebie you can get here.  I changed it a bit so the two stitching sisters were closer together to have them both show from the front.  They are done over-one on 28 count Cashel.  I just turned under the top and bottom edges and did a running stitch to finish.  They are only attached by tape on the back so I can change them up if I want to. 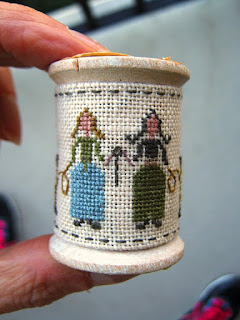 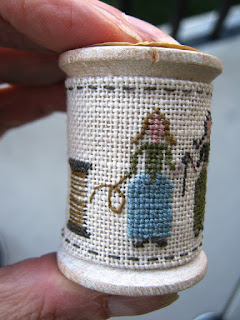 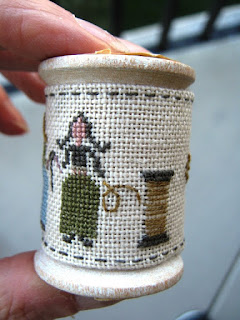 I didn't have the heart to cover the top and bottom.  Look at that fabulous 29 cent price.  Do they even still make Coats Super Sheen? 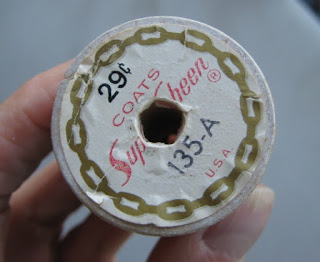 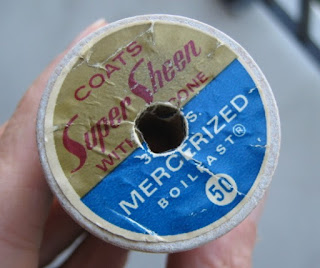