Ezmeralda from the top down..

I've been gradually constructing Ezmeralda's House by Brightneedle from the top down. I started in December, but since this is a larger project than I usually tackle, I've just worked on it intermittently swapping in more small projects. This house turns out to be really great fun to stitch. With the exception of the border, there are really no long boring areas to slog through. And the details are just so much fun. I'm using light coffee 32 count linen from Vikki Clayton, but the color is really not very true in the photo. The whole thing is much more light brown. The designers suggested that one stitch the whole house frame first. That to me sounded like a recipe for frog legs! I fill in as I go and it's proved to be a good decision. Lots of touch points to check your work along the way. 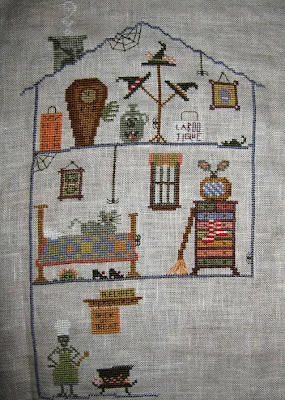 With all the focus on snow in DC, I decided to stitch up a snowman ornament for Pumpkin's Project. This is a design by Trilogy called Secret Snowdrift. It's done on a piece of hand-dyed Aida from Enchanted Fabrics. I'm sorry to hear that Enchanted Fabrics is closing. She did such nice work at such reasonable prices. I've always had a problem with rickrack, but I like the look, so this time I hand basted it in place before machine sewing. I think that worked pretty well. 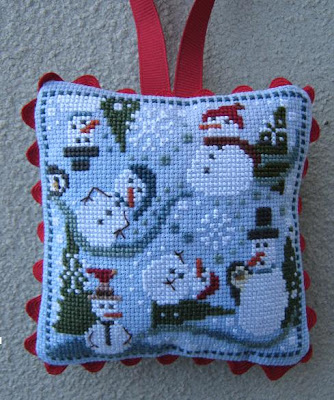 Looks like our snow will be with us for quite some time. Traffic is now a nightmare since people can get their cars out, but roads are still only cleared with a limited number of lanes. I have constant rush-hour type gridlock outside my home making it hard to get a car out of the driveway, and then adding 20 minutes to go four blocks. But I have made good use of the boots I bought after the first of the major storms back in December. Actually, I don't believe all of that first snow ever melted, before getting buried under the next series of storms. After a long, long trip, so long I had given it up for lost, the Valentine I made for the EMS Valentine Card exchange finally arrived at its destination in Canada for Bea. I picked a cute teddy bear monochrome heart design from Aurelle, stitched over-one on off-white Monaco. I was so happy that it exactly fit the opening of my heart cookie cutter. Then I found a number of little crocheted teddy bear patterns on the web and ended up using a touch of each to make the funky little bear. I guess he's a polar bear. White was the only color of crochet thread I had that made any sense to use on this card. I couldn't find any kind of brown or tan in the stores. 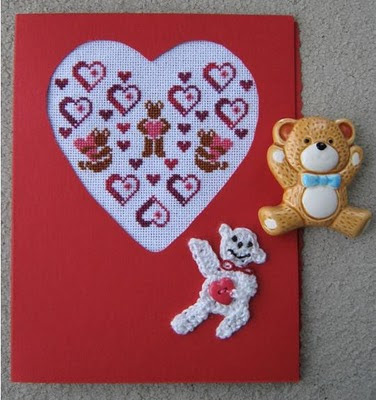 About a thousand years ago I stitched the January horse, a unicorn, from Donna Kooler's "Carousel Horses in Cross Stitch". I had originally planned it as a gift for a baby born in January, but I didn't complete it in time for that. So I decided to make it into a pillow for me. Bought all the supplies, and then let it sit until til today. We had a monster snowstorm here in DC. Started Friday morning and it's still snowing! In the last few minutes, it just started getting a bit heavier, but I think this is supposed to be the tail end. So in honor if this record-setting event (I'm really tired of breaking records with snow totals!), here's my finish. The first photo is before I inserted the pillow form... easier to get a good picture that way.

It's done on a pale blue Zweigart Aida. I suppose if I was stitching this today, I'd go for linen or evenweave. But my heart really still belongs to Aida I think. 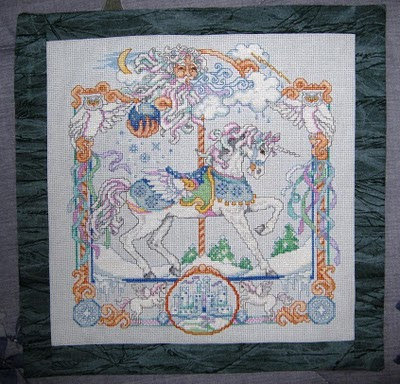 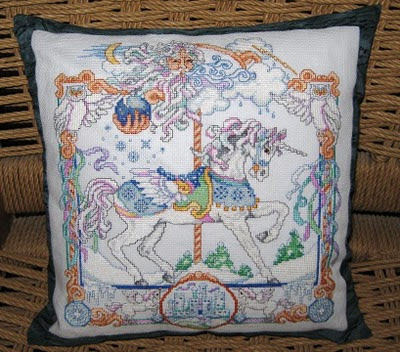 I have three different Suzy's Zoo booklets for cross stitch. They are some of my oldest charts. I can't believe how often I've turned to them for cutesy designs, especially for baby samplers. This little turtle (I think he's officially named 'Corky') is not for a baby, but I thought he made a sweet birthday card. And I had more fun with cutting out my own opening, this time an oval. He's stitched on a scrap of hand-dyed Aida. Those scraps come in very handy. 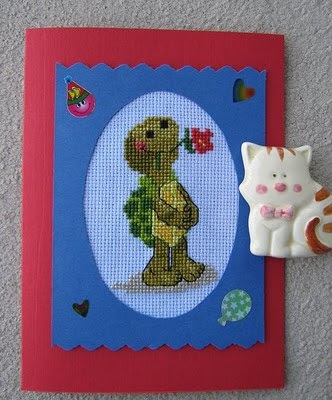