Me and Mr. Jones plus an Angel Bookmark

The fabulous interwebs have once again presented me with an experience I could never have imagined in earlier times.  A delightful guy, Mr. Jones, contacted me via e-mail recently after seeing some of the Altoid tins with cross-stitched tops that I have shown on my blog.   Mr Jones is a guitar player. It seems that guitar players often use Altoid tins to store their guitar picks and other small items.  Mr. Jones asked if he could pay me to make one for him.  He wanted to install it on his pedal board.  I had no idea what a pedal board was, and for those of you in the dark like me, it is the board on which a guitar player mounts the pedals that control various audio effects.  Hope I said that right.

Of course I saw a fabulous stitcher-tunity!  I told him I would be happy to do this at no charge, just asked him to PIF.  He had an idea in his head for what he wanted that included his name and date on the top.  He knew the color scheme he was looking for and he sent a photo of some kind of logo in the 'vintage' style he had in mind.  I had no idea how to really do what he wanted, but I just started making designs for him to choose from.  We settled on an Art Deco alphabet and an interlocking knot border.  Came out looking kind of like a movie marquee from the old days to me.

Mr Jones also asked if I could add a pink ribbon as a tribute to a breast cancer survivor who is close to him.  We decided to put that on the inside of the box.

The stitching is on 28 count dove gray Monaco, 1 over 1 with DMC floss.

The box is completed and Mr. Jones has received it.  He seems pretty happy with the result.  It was a pleasure doing 'business' with him. 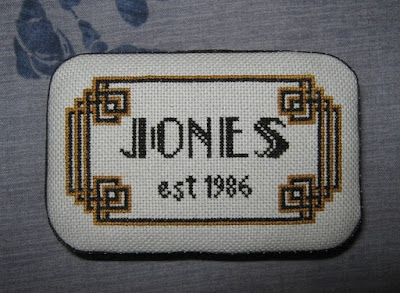 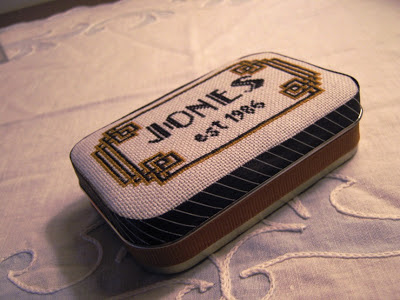 The sticker looks multi-colored, but that just a reflection.  It's black and silver in person. 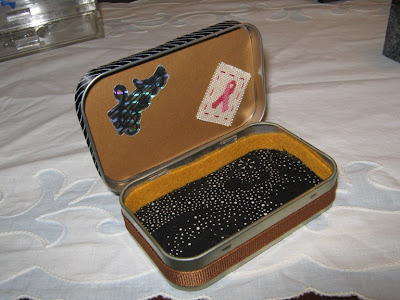 The ribbon is stitched 1 over 1 on 32 count jobelan. 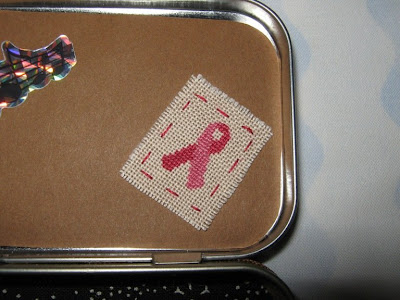 And now for the real fun photo!   This is Mr. Jones' pedal board, complete with the mounted tin.  He used velcro for mounting, a pretty cool idea! 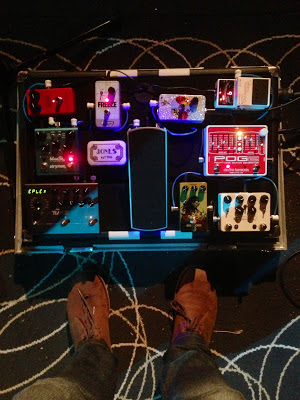 Just got word that another little gift was received from me by  Annette.  I started experimenting with different ways to make fabric bookmarks and this little country angel just made me think of Annette immediately.  She always makes such cute things for her kids.  The little stitchery is based on a digi stamp by Robyn's Fetish.  It's just kind of a funky, country thing.  I've seen similar things on the web and just wanted to try this out.  It's much faster than doing a cross-stitch bookmark and opens up all kinds of possibilities to me.  I'm always looking for ways to use stitchery designs too. 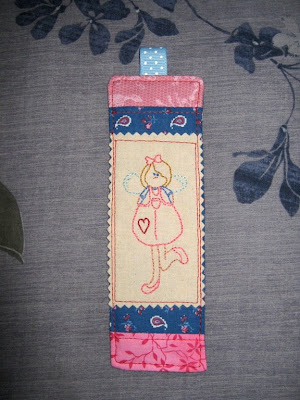 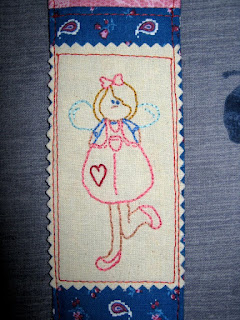 Why is it that whenever I get sloppy and spill strawberry yogurt on a T-shirt, it has to be a new T-shirt?  Story of my life.  But waste canvas to the rescue plus a little freebie from Ink Circles,  Ink Spot #11, Celtic Swirls.  You can get the freebie by subscribing to the Ink Circles Newsletter. I changed the colors to try to match one I saw that someone stitched, but I kind of made that pink too light.  In any case, the strawberry stain is well-hidden.  Some weird rogue stitches with this as always happens when I work on this fabric.  T-shirts are just so stretchy and not at all well-behaved! 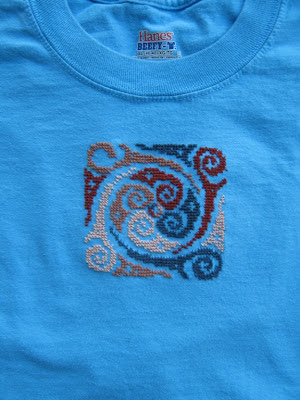 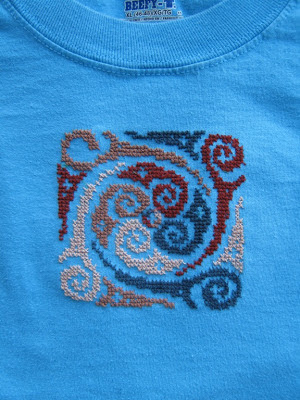 I finished another pair of fingerless gloves with the Fetching pattern, but I forget to take a photo before I gifted them.  They were done with Knit Picks Swish.  I love that yarn.  Just such a soft super-wash wool.

I had a surprise find a couple of days ago.  I was moving a bookcase and discovered I had stored and old piece of crewel embroidery behind it.  It wasn't in great shape at this point and I had completely forgotten about it.  It dates back from the 70's when you could buy marvelous crewel embroidery kits everywhere.  Take a look at all the different yarns and stitches.  Doesn't this look like a fun project?  I think it might be an old Bucilla kit or maybe some manufacturer that has long since bit the dust. 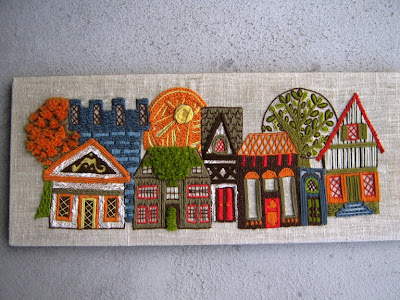