My partner, Jane, in the Stitchin' Fingers biscornu exchange just told me she received the one I made for her. I could see by Jane's other blog that she is a cat lover, so I chose a cat-related design. The original design had a bible verse stitched on one side that I changed to be an old rhyme:

I'm only a cat
We'll get along fine
As long as you know
I'm not yours, your're mine.

The design is free on Cross Stitch Pro PDF.

As usual, it is difficult to find the right angle to take photos of a biscornu. Here's what I came up with: 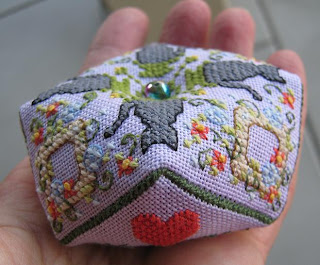 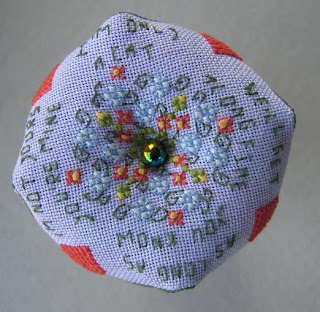 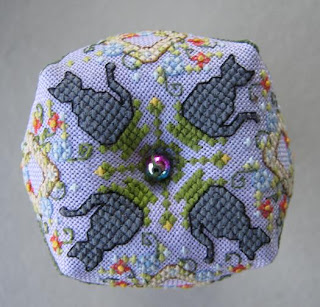 Drop back 5 yards and trapunto...

Using my wayback machine to return to the 70's, I was thinking about a needlepoint pillow I made in those days when needlepoint was all the rage. The pillow sits on a rocking chair to this day, but usually just seems like part of the wood work now. I couldn't remember the name of the technique I used, but after asking around on a couple of boards, I learned this from Jamie:

"The term for raising part of a design by stuffing (or adding cording) is trapunto. The term for attaching a piece to another layer is applique. So this would be either stuffed or trapuntoed applique.

And both of those techniques (among others) are some of those used in the needlework style known as stumpwork. Technically, a stuffed applique on canvas is a padded slip. (As is a slip which is appliqued over one or more layers of felt padding.)"

Two of the strawberries in the photo below were stitched on separate pieces of canvas and then stitched to the main canvas. The main canvas was then slit behind the berries and stuffed so the berries are raised, kind of 3-d like. If you can't see this very well (click on the photo to enlarge), the two raised berries are the 3rd from the bottom and the one directly above that, almost in the center of the piece.

The design was from one the Sunset needlepoint books that I no longer have. 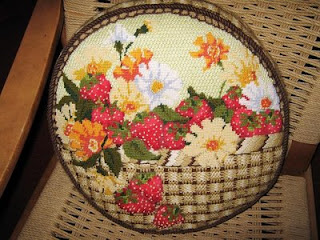 And for cleaning up after French cooking, we have my latest dishcloth. I love these overlapping leaves. The design is called 'Vineyards' by Danielle Côté. Both the French and English versions of the pattern can be found here. 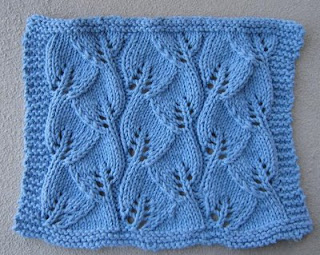 I knew those fish would come in handy...

I fell in love with the "Persuasion" sampler by The Sampler Girl in the Jan, 2009 issue of JCS. I've only recently started to appreciate this style of design, and the sentiment on this one expresses exactly what I have to keep reminding myself in these troubled times.

The stitching is done on Vikki Clayton's hand-dyed linen from a grab-bag of light neutrals...a joy to stitch on. I used only DMC threads and changed a few colors here and there... like multiple blues for the alphabet to give the look of color-variations.

I finished it up into a sling/hipster bag to use when I want to carry a minimum of fairly essential items and stay hands-free. It's lined with the same fabric as the backing with one pocket on the inside. I used Pellon fusible fleece to give it some padding and little heft. My sewing machine is not new to say the least, so I also did a little praying that it would be willing to sew through all those layers. But it performed like trooper. The zipper cooperated this time too. And finally, I've got a home for those fish beads that I bought some time ago with no idea as to how to use them. 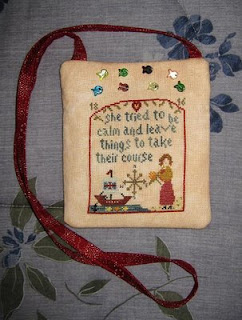 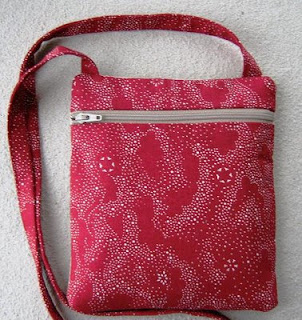 And in the spirit of the season, I crocheted a little shamrock thanks to Kathy, who supplied the link to the pattern. 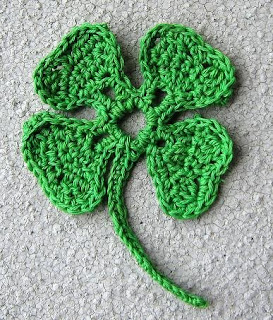 A friend of mine became a first-time grandmother of twin boys recently, and I offered to stitch a baby sampler for them. Just finished it yesterday. This is the 12 Houses Sampler by Drawn Thread stitched on summer khaki 36 ct Edinburgh linen over 2 threads. I substituted DMC colors for some of the hand-dyed threads. And I modified some of the specified colors where I thought it worked better. I added the path, fence, birds and flower at the bottom since I had extra space between the names. The houses use some specialty stitches which were fun to do, but hard on the eyes on this fine-count linen. The babies don't have middle names, only middle initials. The babies were conceived in vitro and the initials stand for the names the doctors gave their blastospheres. The photo is clickable if you want to see more detail. 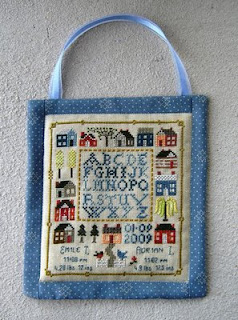 I also found another fascinating pattern for a dishcloth. This is a round one that did not require double pointed needles. It's knit using short rows to create wedges and requires only one seam at the end to connect the first wedge to the last wedge. The pattern can be found here. This is knit using Rosewood Sugar and Cream cotton yarn. 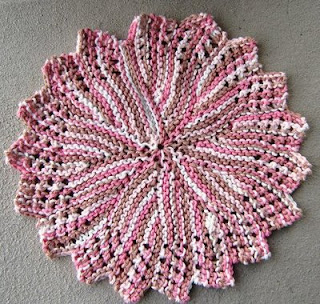