I'm in between bigger projects and thought it was time to use up some of that incredible fabric stash I've acquired over time.  There's a lot of multi-colored hand-dyed Aida that I don't use much these days, so I thought it was time to start finding projects for it.   Once Aida is hand-dyed, it has a wonderful soft feel, but still with a lot of body.  It's like the comfort food of stitching for me to work on it.

I decided to make a couple of bookmark gifts from older freebies.  I picked out this 18 ct mint fabric from the long-defunct Enchanted Fabrics.  Then I just reached into the floss for pretty colors.  The photos make the fabric look more blue, but it's really a beautiful variegated mint color.  I'm using it for the By the Bay Needleart Mystery SAL also.

First is this lovely bird design from a freebie on the Stitches Crumble blog: 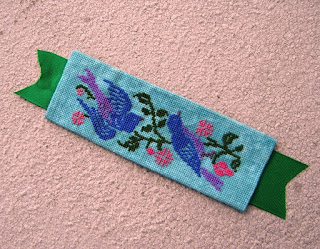 Next is this older design from Papillon Creations called Bookmark 1 on the freebie page.  Thanks, Heather, for finding it for me.  It only has three colors and I see that a lot of stitchers have chosen their own combinations.  I just wanted something pretty with a lot of contrast against the background fabric: 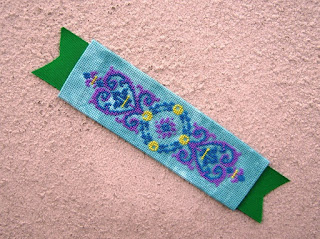 Tortoise and the Hare AAQI Quilt

I had my eye on the "Tortoise and the Hare" designs by The Prairie Schooler for a while.  The leaflet had two designs in the same theme, but each was quite different in nature.  I decided to use the smaller one for an AAQI quilt.  I have a perfect spot on the wall for the larger one so I'll do that for myself.

I love this fable, but I do sympathize with the hare.  "Seize the day", "Strike while the iron is hot", "He who hesitates is lost" ... those are all the inspiring adages we hear all the time.  "Slow and steady wins the race"  seams so boring and not in the spirit of "No guts, no glory".  The bunny messed up, as risk-takers sometimes do, but I suspect there will be a re-match with lessons learned at some point.

Anyway, the small design was charted with the words "Rabbit Hare Tortoise Slow".  Needed more I thought.  So I stitched the two opposing adages, "Time waits for no one" and "Haste Makes Waste" instead.  Of all the adages I thought of, these fit the best in the space I had   The two runners can argue about this over a beer during a teachable moment.

The fabric is 32-count peach butter linen from Vikki Clayton.  She doesn't offer that shade anymore and I really like it. 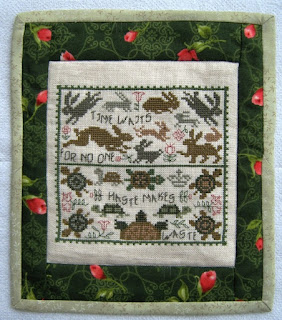 I experimented with a new way to do a quilt label. I had been doing x-stitch labels, but I was tired of stitching my name and city over and over.  So this time I decided to just write the wording on with a marker.  I used Word to print the text so I could more or less get the spacing right.  I found two little clip art images for a tortoise and a hare and included those in the printout.  I then pressed some freezer paper to a piece of muslin to stabilize it.  Using an ultra-fine point Sharpie, I kind of traced the wording onto the label.  Really I just used the letters as a guideline.  Then with a washable transfer pen, I traced the tortoise and hare and drew a free-from border followed by a little back stitching with 1 strand of DMC.  I folded under the edges and stitched the label down on the quilt back.  Lots of possibilities here.  Sometimes I'm more into label-making than quilt-making. 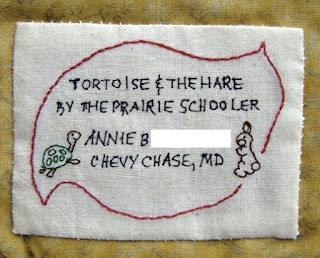