Some time last summer I discovered this design of nine funky peacocks on Pinterest.  I had a heck of time finding the original source pattern as often happens with those pins, but I put on my x-stitch detective hat and kept looking.  I finally found it in an on-line only magazine,  Antique Sampler Stitcher  Issue 8, August/September 2009.  I had never heard of this magazine before. It has very homegrown amateur feel about it.  They sell back issues pretty cheap so I took a chance and ordered it.  I received the .pdf file in a wink so I'm at least one customer who can vouch for the site in case you see anything you like there.

This design was earmarked to become a sling bag at that time.  But somehow, I kept getting interrupted to stitch other things.  I'm usually a one-project-at-a-time stitcher so I don't exactly know how it got delayed.  Anyway I finally got around to completing the stitching and managed to take a slice of time to finish the sewing.  I used the suggested DMC colors, but the finish is much paler than the model in the magazine.  At first I was disappointed, but now I've come to appreciate the subtlety.  I mean who wants to scream "Peacocks!"  wherever they go.

The fabric is 36 ct Edinburgh Summer Khaki linen.  This one uses iron-on fusible craft fleece for stability and it came out with just the right amount of stiffness. Sometimes I have trouble getting that stuff to adhere properly to the fabric, but this time it worked out fine.  I think I may not have had my steam iron set hot enough on some previous attempts.  Final size is about 7"x8", perfect for most of my needs. 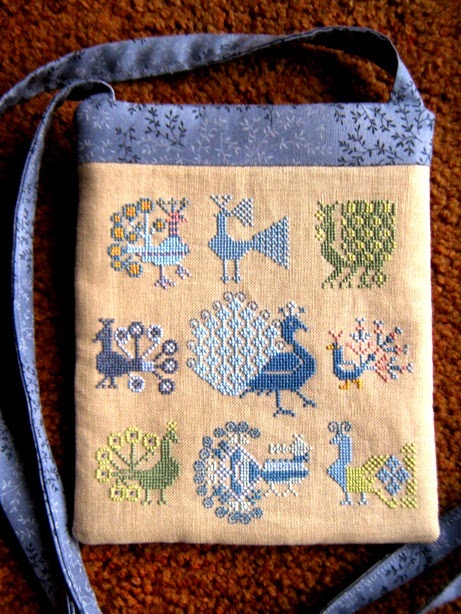 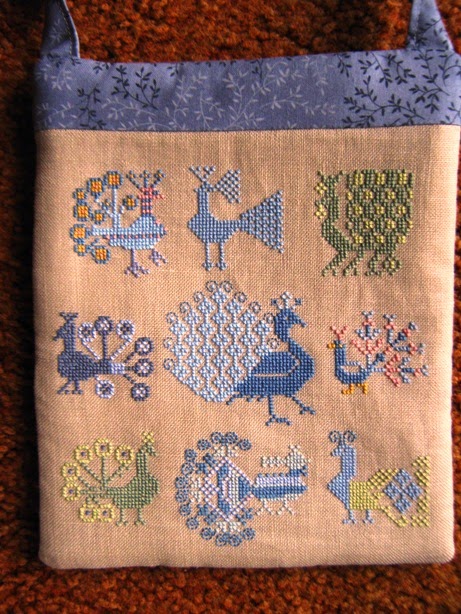 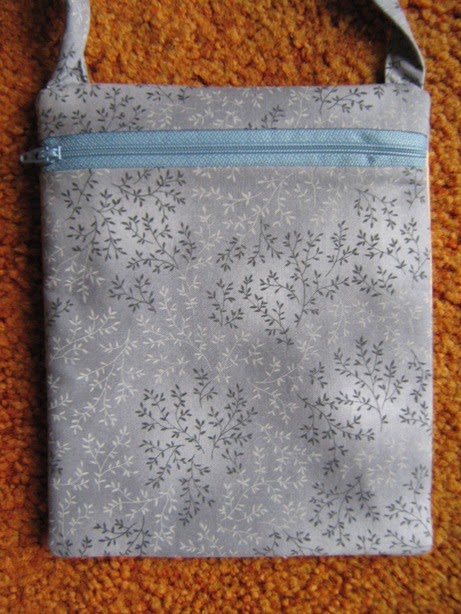 I was beginning to think this post was never going to happen.  This project seemed to be one disaster after another, but somehow it finally got done. I had expected it to be finished much sooner, but I'm happy it finally gelled.

I fell in love with Elizabeth Talledo's "Fall Pumpkins" hornbook design in the Oct. 2014 issue of JCS.  Since I had done the Spring one as an Altoid tin top, I knew this was the right size for one, so I decided to go ahead and stitch it with that finish in mind.  I used Summer Khaki Cashel linen, one over one with DMC threads.  After I finished the bowl that holds the pumpkins and looked at the rest of the chart, I was shocked to see that Elizabeth had charted a lot of petit point motifs.  In other words, I should have been stitching that bowl over two so I could halve the size of the stitches for the other motifs.  No way to stitch over half a thread!

I almost abandoned the project at that point.  But I took it as a challenge instead.  I re-charted three birds to make them simpler so they would fit in the space.  The background had included a lovely alphabet and the numbers 1-10, but I had to let that idea go.  I just looked around for fall sampler motifs and sprinkled them in the background - owl, acorn, key, tiny pumpkin, etc.  I'm still not perfectly pleased with those choices, but enough was enough.

Then in the finishing, I started gluing the ribbon around top, only to realize I had chosen ribbon that was too wide.  So I had to pull that mess off and re-start.  The padded stitching is kind of lumpy too.. I don't know why that happened.  But at least had 1/4" ribbon in the right color.

For the inside I got the idea to do a round keyring fob.  I thought I still had one of those bottlecap frames to make a magnet, but I couldn't find it.  So I just used a backing with plain fabric stretched around cardboard and sewed it to the stitching stretched around cardboard.  I stitched the trim around at the same time I stitched  the front to the back and it started fraying all over the place.  I had to used clear-drying glue to tamp it down.   The design is a little witch from a freebie called "Hallowen Witch and Tree" by Kathleen Finn of Stitches of Olde.  She gave the freebie to members of  the FB Prim Stitchers Society.

On to the next project! 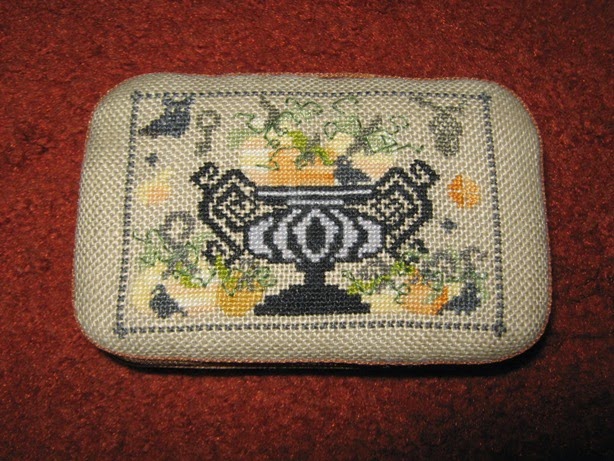 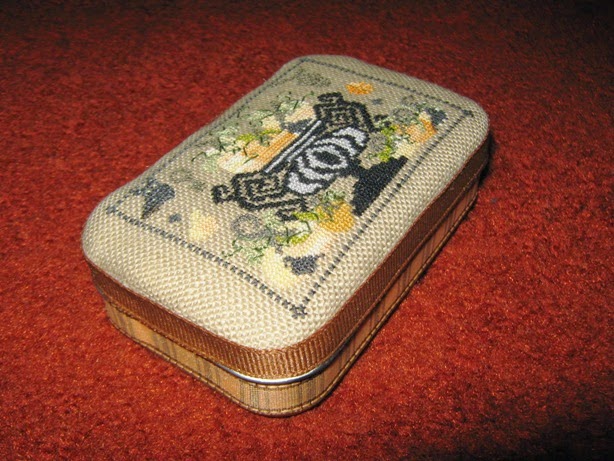 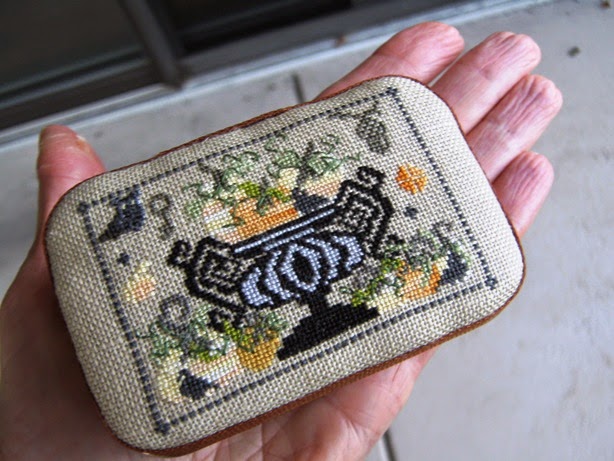 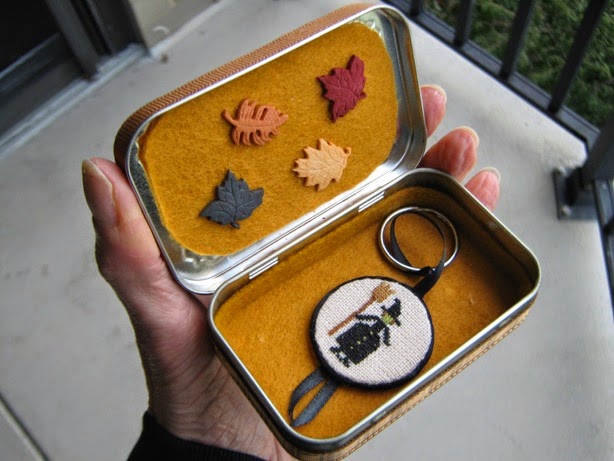 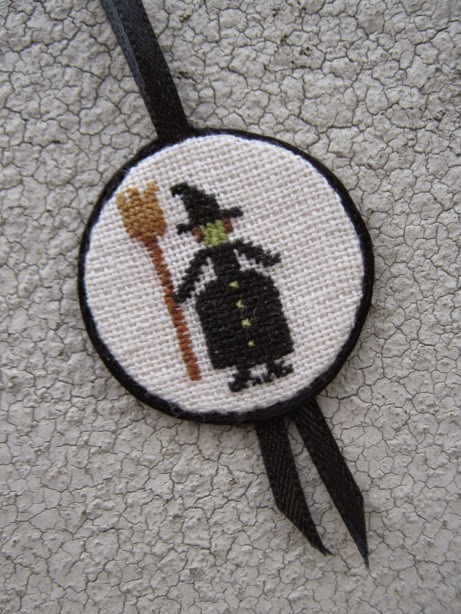